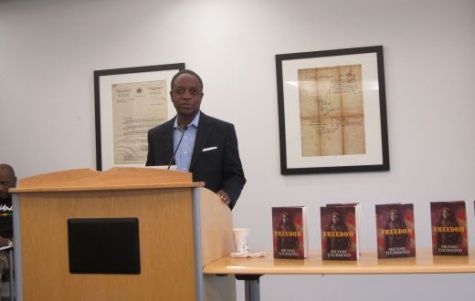 This meeting commemorated the 12th anniversary of our chapter, and we were honored to have as our guest speaker Michael Thurmond, the former Georgia Labor Commissioner.

Mr. Thurmond engaged the audience with his extensive knowledge and quick-witted humor as he spoke on the topic: "African Americans in the Civil War: A Birth of Freedom". Afterwards, Mr. Thurmond signed copies of his latest book, Freedom: Georgia's Antislavery Heritage, 1733-1865.

It was a great meeting. If you were unable to attend, you missed an excellent lecture and lesson on Georgia history and the Civil War. 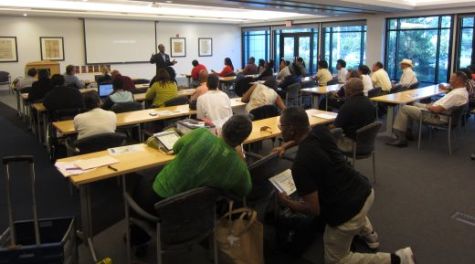 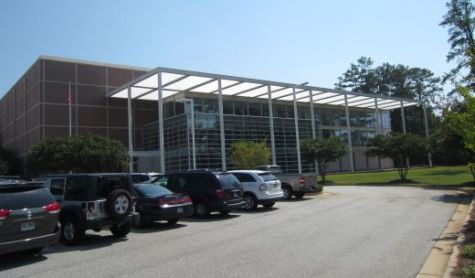 At our 12th anniversary meeting on Saturday, September 22, Elizabeth Olson from the Georgia Genealogical Society gave us an update on the status of the proposed closing of the Georgia Archives.  On Thursday, September 13, the state of Georgia heard some very disheartening news.  Due to budget cuts, Georgia Secretary of State Brian Kemp decided to close the Georgia Archives to public access, making it the only state with a closed state archives.  This drastic move is scheduled to go into effect on November 1.  To add, seven of the ten remaining full-time employees will be let go, also effective Nov. 1. This was a major blow to an already skeletal staff due to past budget cuts.  The remaining three employees will be the director, the assistant director/archivist, and the facility manager.

At the Archives Month Proclamation ceremony this past Wednesday at the state capitol, Gov. Nathan Deal said to a group of nearly 100 archivists, historians, genealogists, educators, etc., "I will keep the Archives open." As of today, the Georgia Archives is still slated to be closed to the public effective Nov. 1. From what we understand, the governor has placed full blame on the Secretary of State Brian Kemp and has stated that he has no jurisdiction over Kemp's decision. There has not been anything in writing stating that the state of Georgia will keep the Georgia Archives open to public access.
Many feel that even when/if public access is eliminated and visitation is by appointment only, three employees will not be able to sufficiently handle appointments and maintain the other Archives duties that are mandated by law. Therefore, the fight continues!

Here are three ways you can help:

(1)   Sign the petition to keep the Georgia Archives open: https://www.change.org/petitions/the-governor-of-ga-leave-our-state-archives-open-to-the-public

Submitted by Melvin J. Collier
Posted by Unknown at 6:04 PM 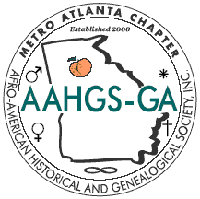 The Afro-American Historical and Genealogical Society, Inc. (AAHGS) is a non-profit, membership organization committed to the preservation of the history, genealogy, and culture of the African-ancestored populations of the local, national, and international community. AAHGS stresses the importance of African American history and genealogy by encouraging active participation in researching, recording, and documenting personal family histories. Membership is open to the public.

(1) To provide a forum in the Metro Atlanta area for the sharing of historical and genealogical information and research sources about African Americans.

(2) To organize workshops and a speakers' forum to meet the needs and interests of chapter members.

(3) To compile research that will preserve African American history in the United States.